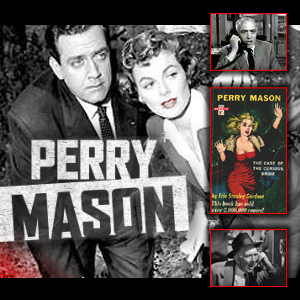 Perry Mason is a fictional defense attorney who originally appeared in detective fiction by Erle Stanley Gardner. This long running radio drama had several actors who played the famous lawyer starting with Bartlett Robinson and then followed by Santos Ortega, Donald Briggs, and finally John Larkin who played the famous attorney after 1947. The radio portrayal of Perry Mason is a far more involved lawyer then the one who became famous on TV, the radio version would rather swap gunshots with evildoers than sit in a boring courtroom, waiting for the deliberation! The show was only 10 minutes and was more intense and favored action than courtroom drama. Perry Mason ran 12 seasons and moved to TV in the late 1950's with the now famous portrayal by Raymond Burr. Each show follows a continues story line similar to soap operas. Join us as we join Perry Mason in crime mysteries and court room drama.